The Internet of Things (IoT) is rapidly changing the technology landscape as we know it. Businesses worldwide are leveraging IoT for benefits such as seamless collaboration, access to comprehensive data and the ability to make stronger business decisions based on insights derived from substantial data. Experts estimate the total number of installed IoT-connected devices worldwide to amount to 30.9 billion units by 2025.1

However, as we know, all that glitters is not gold. Due to the exponential growth of the number of IoT devices, the increasing amount of sensitive data these devices handle and their ability to function with minimal human intervention, the doors have been left wide open to high-level cybersecurity risks. IT professionals consider about 60% of IoT devices to be vulnerable to medium- or high-severity attacks.2

Essentially, the IoT ecosystem is made up of numerous interconnected devices constructed with unique sensors that collect, share, process, act on and store data. This introduces a growing risk for IoT users since hackers could exploit the vulnerability of a single device in the ecosystem and potentially gain “backdoor” access to your business’ entire network and wreak havoc.

9 IoT-Related Risks to IT, Network and Data Security
Nefarious cybercriminals can target and use IoT devices to exploit vulnerabilities in your IT network as well as the four components of an IoT device—the hardware, connectivity, software and interface. Here’s a list of nine IoT-related security vulnerabilities that you must mitigate immediately:

1. Lack of Proper Security Controls Within Most IoT Devices
Even though several flaws regularly emerge in an IoT device’s software, most IoT devices lack the capability to be patched with the latest security updates. As a result, the devices are indefinitely exposed to evolving security risks.

Many Operational Technology (OT) systems lack filtering chokepoints, such as firewalls or router ACLs, which render standard network remediation tactics ineffective when it comes to preventing the spread of malware. In fact, it could trigger critical infrastructure disruptions or failures. Most IoT devices even lack the basic encryption systems to secure data in transit and at rest. In fact, over 95% of all IoT device traffic is unencrypted.3

2. Threat to Protection of Sensitive Data
The sensors on IoT devices collect (potentially store and share) copious amounts of sensitive data without your knowledge or explicit consent. For example, an IoT device is capable of collecting data on what you say, do or buy from inside your home or business’ office. One doesn’t need to be an expert to imagine how devastating it would be if any of this data was compromised through industrial espionage or eavesdropping.

3. Threat to Workplace Security
The rapid surge in the number of IoT devices and applications within the modern-day workspace has posed a multifaceted security challenge for a business’ IT team. Today’s decentralised networks that involve the increased utilisation of segmented “home” networks, have added multiple potential attack vectors.

The 2021 Data Exposure Report prepared by the Ponemon Institute stated that home networks are 71% less secure than office networks. The more the number of IoT devices used by employees on their home networks, the greater the security risks.

4. Absence of Regulations or Standards for IoT
Currently, no regulatory requirements or standards for the manufacturing of IoT devices exist, either globally or industry-specific, with respect to security and data protection controls. This means businesses have been left on their own to mitigate IoT-related risks with little to no guidance.

5. Vulnerable Default Passwords
Cybercriminals find it easy to exploit hard-coded and embedded credentials to enter a business network. When an entire string of IoT devices share the same credentials (such as username: admin and password: admin), it serves as an open invitation for hackers.

6. Impossibility of Implementing a Single Security Policy
IoT ecosystems are complex due to the diverse types of data collected by the devices and the varied computing powers of each device. This complexity makes it impossible to implement a “one size fits all” security policy or solution to tackle the digital security risks spread across the “IoT journey.”

7. Inability to Train Every User on IoT Security
Regular security awareness training has proven to be effective in significantly reducing the likelihood and impact of cyberattacks. However, businesses are unable to leverage this tool to educate users on IoT functionality and its related risks due to the lack of broad universal knowledge and awareness about IoT at the user level.

8. Life-Threatening Risks to Data Integrity
If the data collected by medical IoT devices (such as pacemakers and continuous insulin regulators) is compromised or lost, it can turn into a life-threatening risk for patients. Any business in the healthcare industry using medical IoT devices must prevent this risk from jeopardising data integrity, control and security.

9. Innate Vulnerability to Cyberattacks
A cybercriminal can exploit an unsecure IoT device without even breaking a sweat. About 72% of organisations experienced an increase in endpoint and IoT security incidents last year and 56% of organisations expect a compromise via an endpoint or IoT-originated attack within the next 12 months.4 Here’s a list of the most common routes a hacker might take to exploit your business:

Strategies and Best Practices for Mitigating IoT Risks
The above-mentioned risks shouldn’t completely discourage you from leveraging IoT technology in your business. You can reap the valuable benefits of this technology with proper information and implementation of security best practices and strategies, which will help you tackle and avoid IoT-based risks. Some steps in the right direction include thorough risk assessment (with respect to IoT), automated and routine patch management, security policy management for both internal and third-party systems, and more.

You do not have to navigate this rocky road all by yourself. Let us help you build a resilient defense against IoT-related risks. Contact us today to learn more.

Cyber Insights with Mercury IT- January 2022

Welcome to the first edition of Cyber Insights for 2022. This month we highlight a current scam relating to ...
END_OF_DOCUMENT_TOKEN_TO_BE_REPLACED
Blog 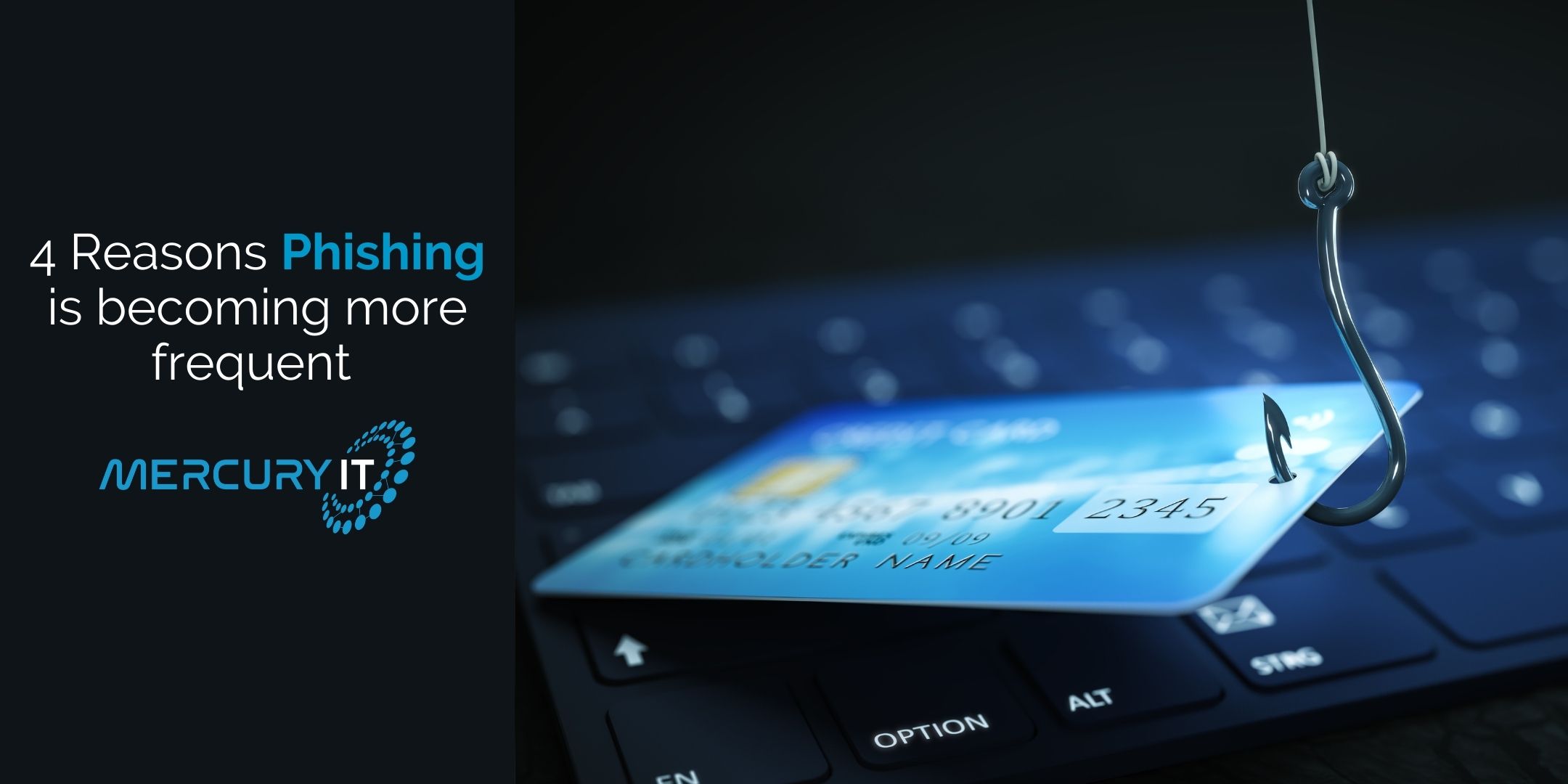 4 Reasons Phishing is Getting More Frequent

Phishing is a social engineering attack used to obtain sensitive information, such as login credentials and ...
END_OF_DOCUMENT_TOKEN_TO_BE_REPLACED