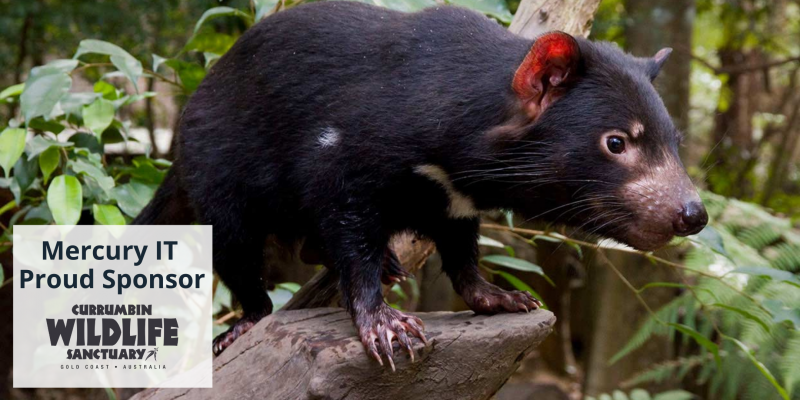 Mercury IT are a long-time supporter of Currumbin Wildlife Sanctuary and proud sponsor of the Tasmanian Devils’ Exhibit.

In 1947, Dr Alex Griffiths opened up, what was then the Currumbin Bird Sanctuary, to the public as a small-scale lorikeet feeding display. In short order, this wonderful arena of birdlife garnered the attention of both locals and tourists, eventually becoming one of the Gold Coast’s best family attractions.

The park was gifted to the National Trust of Australia (Queensland) in 1976, which turned the site into a not-for-profit social enterprise to directly facilitate the park’s rising numbers of native flora and fauna.

In 1989, the original Currumbin Wildlife Hospital was founded, and specialist veterinarians have been caring for sick, injured and orphaned wildlife ever since.

In 2010, the Currumbin Wildlife Hospital Foundation was initiated to support the critical demands of the hospital (with its 11,000+ animal admissions per year), which operates as a community service. The Foundation aims to raise $1 million annually to treat, rehabilitate and release sick, injured and orphaned native wildlife, and to fund much needed koala chlamydia research.

Currumbin Wildlife Sanctuary, officially renamed in 1995, is now a heritage-listed zoological garden set across 27 hectares of natural eucalyptus-rich bushland and rainforest. The park was deemed to be of great importance to the evolution of the state’s history, and was subsequently added to the Queensland Heritage Register in 2009.

Today, the Sanctuary is home to native mammals, reptiles, birdlife and amphibians as well as some exotic species. Strong support from locals and the emergence of ecotourism has allowed the Sanctuary to thrive since its inception.

Welcome to Cyber Insights! In this edition we share a scam relating to Microsoft Teams, provide an update on a...
END_OF_DOCUMENT_TOKEN_TO_BE_REPLACED
News

Welcome to Cyber Insights, this month we share two security breaches carried out by ‘The Lapsus$ ...
END_OF_DOCUMENT_TOKEN_TO_BE_REPLACED